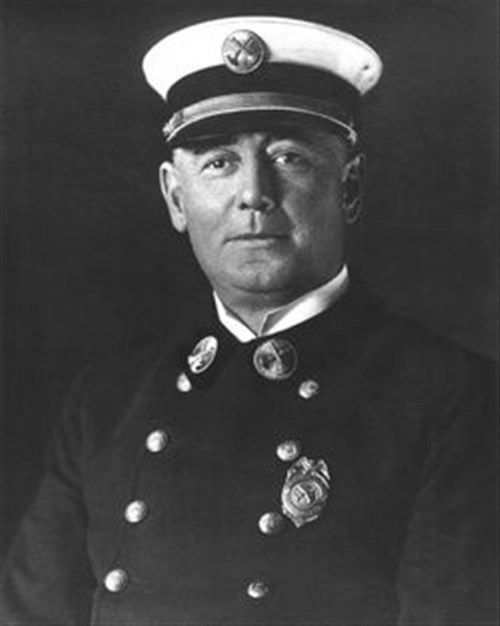 Assistant Chief George T Crockett, 46, died from pneumonia and weakened lungs as a result of the inhalation of ammonia fumes after a burst pipe at the Amalgamated Leather Plant, Front and Adams Streets on July 27, 1923.  This was according to Chief Crockett's personal physician, Dr. Lawrence J. Rigney.  Chief Crockett was a member of the Fame Fire Company volunteers at Second and Orange for 27 years before joining the Bureau of Fire.  Wilmington Fire Chief William J. Lutz, under whom Crockett has served for nearly 17 years, paid high tribute to the assistant chief stating that he was "an authority on water capacity, the testing of rubber, machinery, and practically every other branch of mechanical service".  Chief Crockett was active in lodge and fraternal circles, most notably with Wilmington Lodge #307, BPOE, Local Arie of Eagles, Loyal Order of Moose and the Firemen's Relief Association.  A funeral service will take place on Monday morning at 10:30 at St Pauls RC Church.  Members of the off platoon, comprising about 80 men will be in attendance, as will members of the Fame Fire Company.  A band will also be supplied.  Chief Crockett was survived by his wife and his two daughters, Mildred and Gracie.