Oliver Courtney was a member of the Phoenix Fire Company which was merged into the Wilmington Volunteer Fire Company prior to the department becoming career in 1921.  He died in the area of 18th and Market Streets when the engine he was driving plunged into a ravine that was being excavated for a race tunnel.  Courtney was trapped beneath the engine which had pierced a water line.  As the water poured into the ravine, Courtney was heard saying "help me".  Rescue efforts were attempted, but the engine could not be pulled off the fireman.  It took a wrecking train to finally lift the fire engine off Courtney.  Courtney was a popular young man.  He was the son of the late Henry Courtney, the match manufacturer. He had been a member of the Phoenix Fire Company for several years.  His death cast a gloom around the fire station.  Although the horses plunged into the ravine, none were injured. 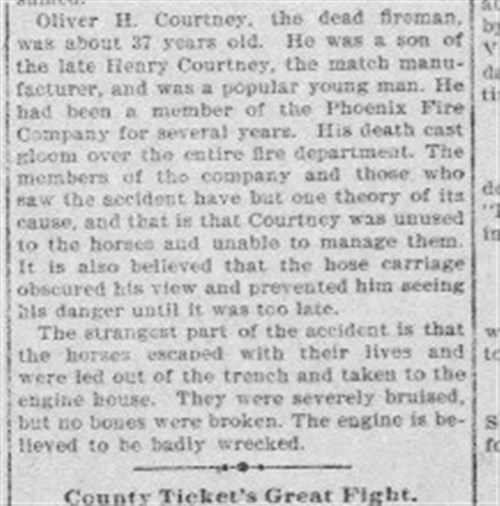