John A. Campbell, 35, of the Weccacoe Fire Company, died shortly after noon on June 20, 1904.  He was one of the most popular firemen in the city and for the last 6 years was a driver in the employ of the Weccacoe Fire Company.  On June 6, 1904, Campbell was exercising one of the engine horses when he was thrown from the animal, suffering a fractured right leg.  The animal was spooked by a firecracker.  At first the injury was not thought to be serious, but within a day or two, gangrene set in quickly to the alarm of physicians, who swiftly amputated Campbell's leg.  His condition was reported as improving and his friends gave hope for recovery, when he took a rapid turn for the worse with death relieving his suffering shortly before 1 p.m.  Campbell was not married.  His funeral will be held at the home of his parents at 222 Adams Street. 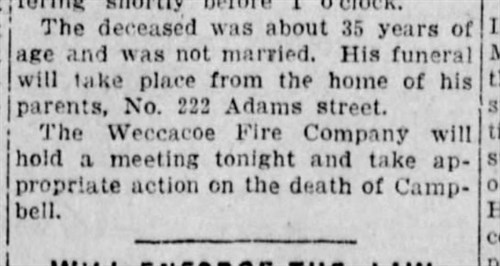 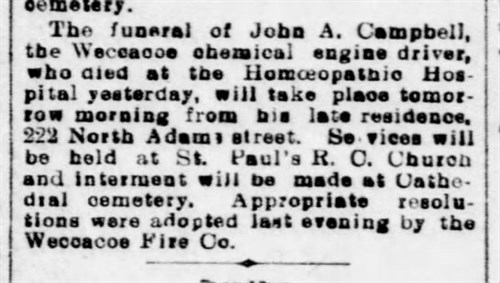